This is a reprint of a CNN page located at:

CNN does not endorse the Grant Chronicles, the article presented is used as reference material 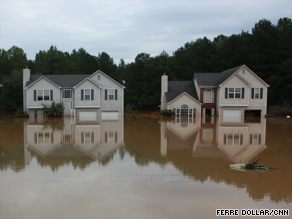 At least eight people have died in the state from the flooding, and one person is missing and presumed dead in Chattanooga, Tennessee.

To the west of Atlanta, Douglas County was particularly hard hit with six people confirmed dead.

The latest victim was a young adult male found dead in the northwest of the county, said Wes Tallon, county spokesman for the emergency management agency.

The death was an "obvious flash flood death," Tallon said, adding that the body was found with a vehicle downstream from a roadway.

Parts of northwest and south central Georgia, as well as the metro Atlanta area, were still under a flash flood watch Tuesday night. Standing water remained throughout parts of Atlanta.

But CNN meteorologists said the heavier rain had shifted west of the hardest hit areas in Georgia. They expected significant rain in parts of Mississippi and Louisiana, where the ground was saturated by the earlier storms that moved up from the Gulf of Mexico to cover the southeast.

But slow draining waters Tuesday left portions of highways I-285 and I-20 on the city's west side still closed Tuesday night, and several state roads in the area were closed because of flooding, or bridges and roadways washed away.

Georgia Gov. Sonny Perdue pleaded Tuesday with residents to stay off roads, noting that nearly all the fatalities so far were drivers and passengers swept away by the floodwater.

"Stuff is important but it's not nearly as important as your life," he said. "Please give these waters time to recede."

Perdue said he planned to ask President Obama to declare a federal emergency in Georgia. The governor has declared states of emergency in 17 flood-stricken counties. Until just a few months ago, the area was gripped by drought.

Schools in the Atlanta metro area were closed Tuesday as some isolated storms soaked areas around the city. The rains were not as widespread or heavy as they were Monday.

In Douglas County, some of the flooding victims spoke to family members while trapped inside their vehicles.

"She said that the vehicle was being taken by water, that it was starting to take the car," said Lori Jones, whose niece, Delena Waters, died in the flooding. She spoke to CNN affiliate WSB-TV.

"The last thing they heard was that she was floating away."

Another victim's relative had a similar story:

Emergency management spokesman Tallon also reported an adult woman found dead downstream from a car that had washed off the roadway.

One group in the county was more fortunate. County emergency director Jason Milhollin told CNN that a car was swept off the road during the morning commute, and four other people who tried to rescue the driver were also swept away. All five were later rescued, he said.

"They were fine, no one went to the hospital," Milhollin said. "Luckily they had a fence to hold on to and we got the boat to them."

Elsewhere, a 2-year-old boy and a 39-year old woman were killed. The toddler died when he was ripped from his father's arms by fast-moving floodwater as the father struggled to hold onto bushes, officials in Carroll County, also west of Atlanta, said.

Seydi Burciaga, 39, was swept off a road in Lawrenceville in Gwinnett County, east of Atlanta, when flash flooding trapped her in her vehicle, Gwinnett County police said.

She called 911 and police tried to locate her, but Burciaga could not tell them exactly where she was. Floodwater moved her minivan about 500 feet after she was swept off the roadway, and her attempts to guide rescuers by mentioning landmarks were unsuccessful, police said.

By the time rescuers found the minivan, she was dead.

Some areas west of Atlanta have received more than 22 inches of rain since last week, nearly half of that falling from Sunday night to Monday morning.

After Georgia creeks and rivers burst, swollen by days of rain, residents struggled to escape.

An additional death was reported likely in Tennessee, where a presumed drowning victim was forced into a culvert, or underground storm water drain, Sunday evening, Chattanooga Fire Department spokesman Bruce Garner said. Sylvester Kitchens Jr., 46, was with friend Albert Miller when they decided to swim in a large, flooded ditch, Garner said. He said a Miller family member told him that "basically, it was a bet."

Both managed to grab a chain-link fence while being buffeted by the strong current, Garner said. A neighbor threw a garden hose for them to grab, and Kitchens reached for it but couldn't hold on. Miller clung to the fence for about 20 minutes and was eventually rescued by firefighters, Garner said.

Kitchens' body has not been found, said Garner, who added that it "doesn't appear he could've survived."